Terminal design and haulier procurement for the removal of tunnel spoil from central London.

The BamFerrovialKier Joint Venture (BFK JV) was successful in winning the contract to bore the two Crossrail running tunnels from Paddington through London’s West End to Farringdon.

This required the removal of over 1,000,000 tonnes of excavated material at a peak rate of over 40,000T per week (equivalent to 400 each-way road journeys, or five train loads a day).

Rail freight was the only way to move this amount of material without causing massive local road congestion and at an economic rate. Railfreight Consulting was employed by the JV to give support in the following areas:

Our key achievements were:

Key to the commercial success of the procurement was our knowledge of the haulier marketplace and how to run an effective railfreight procurement process. We constructed the tender documentation to encourage competition through a simple pricing regime and to ensure that the flexibility and scalability BFK needed to meet the tunnelling programme was achieved.

We used our operational knowledge to develop a loading arrangement and shunt plan which enabled the 33% increase in train length. We then worked closely with our contacts in Network Rail to gain approval to run this very long train over routes where such a train had never run before. 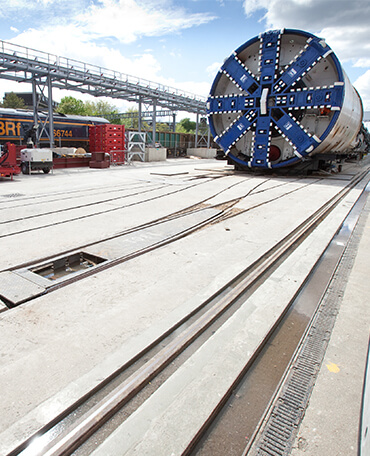